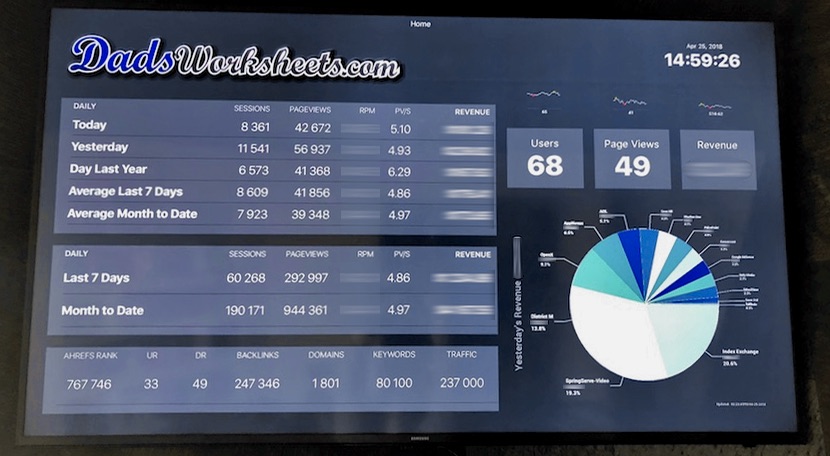 For a little over a year, I’ve been running a fantastic NOC-style dashboard on the AppleTV in my office courtesy of a nifty app called Dasher. It took a little Python gymnastics, but I was able to pull data from Google Analytics, Ahrefs and Staq to assemble a consolidated view of what’s happening at DadsWorksheets.com, all of which helps keep my eye on getting things done there.

Much of the work in this is a Python script that runs locally to collect the data. I’ve been pushing that data up to Dasher’s servers, which then gets fed back to the Dasher app on the AppleTV. But I’ve been concerned for quite some time because this app never got the love or attention it deserved, I’m sure in large part because it required chattering through a web API to push the data. So as well as this worked, it was never really going to be broadly adopted by anyone but us propeller heads.

That means I knew the hammer was going to fall on this little gem at some point, and sure enough I got the email yesterday that Dasher was shutting down in May.

I rely on this dashboard enough that Dasher’s demise caused me to peel off for part of yesterday to find a replacement. I didn’t want to spend the next few weeks with some thought gnawing the back of my head, so I at least needed a plan.

And there are several good alternative dashboard apps out there, many of which with integrations to Analytics plus 100 other services I didn’t need. These are all great solutions, but they also all came with $10 per month fees, and missing integrations to oddball places like Staq and some of the other custom bits that I’d still have to jump through hoops to get fed anyway.

I’m already collecting all the data and generating a few simple charts in Pillow, so sending it somewhere that would ultimately show up on the AppleTV shouldn’t be hard. If there was even a simple version of Safari or another browser I could load on the AppleTV to bring up and auto-refresh a web page, I’d have a solution by kicking out some HTML or a even a full blown Vue.js app, but short of renewing my Apple developer account, reinstalling Xcode and side-loading tvOSBroswer, there isn’t much on the map.

That’s why I’m so glad I found AnyBoard. This is a great little app that does everything and more that Dasher did, but without putting a third party server in the middle.

When you setup Anyboard, you point it at a JSON file that you’ve made visible somewhere. That JSON file describes how one or more dashboards are laid out and also where to get the data. The data comes from other JSON files you identify using URLs in the configuration. By refreshing those JSON files with new data, the Anyboard app will have access to live data feeds from whatever sources you can cobble together. There’s also a pre-built setup for Nagios, but I didn’t play with it here.

Because all of the dashboard data is moving between the Apple TV and the local network, you can configure Anyboard to hit URLs on a local server, so your dashboard configuration and your actual data can stay inside the building. Also, you’re not dependent on a third party developer necessarily pulling the plug on the API that feeds the app. So I’m anticipating a very long relationship with Anyboard here.

Not that I think there’s anything to worry about. I traded a few emails with Ladislav at sféra, the Anyboard developer, and he was eager to help work through some odd things I was doing in my configuration and answer a few questions I had. These are the kinds of guys worth our support.

I was able to port my Dasher configuration over to Anyboard in about half a day, and the resulting dashboards look better than they ever have. Anyboard is free, there’s no premium version (which I would have gladly bought) or subscription fees (which I would have ruled out). It’s a solid app that does an important job and does it well. I can see a few minor areas that I hope Ladislav polishes up in future builds, but if you’re comfortable cranking out a few simple JSON files, I can definitely recommend Anyboard as an AppleTV dashboard solution without hesitation.