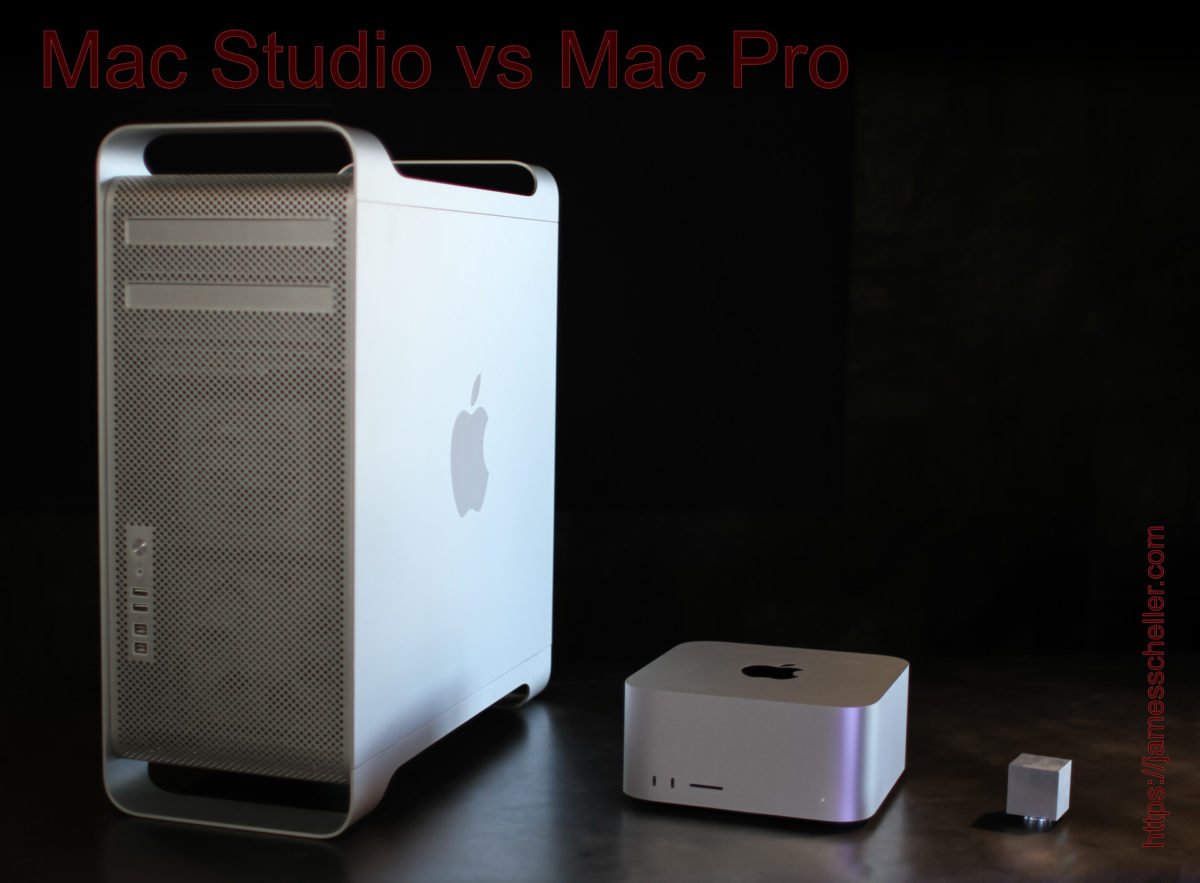 My 2009 Mac Pro has gone quite a distance with me, and as an investment it’s probably one of the highest returns on capital I’ve made given the amount of consulting work it’s churned out with me. I’ve kept it reasonably upgraded, added memory, PCI SSDs and a Radeon RX580 so it would run MacOS Mojave. However, as the operating system upgrades became harder to keep up with, and basic things like memory bandwidth and SSD performance leapt further ahead, it’s become time to send this friend out to retirement.

I’d have upgraded this warhorse some time ago, but Apple’s 2019 Mac Pros landed during a period of budget consciousness, and shortly later, the announced transition to Apple Silicon meant I’d be waiting until an ARM-based machine with a reasonable amount of memory was released. My Mac Pro has 48GB of RAM, and many of the jobs I run chew up 20GB or more of memory, meaning that even a 64GB memory (especially shared with the GPU) wasn’t going to leave much in the way of future-proofing.

But when the new Mac Studios were announced, I finally had something that looked like a reasonable replacement, and I pre-ordered on announcement day.

Now that I’ve had this machine running in place for about two weeks, I thought I’d share my subjective experience moving from what was near the top-of-the-line Mac thirteen years ago to a similar candidate today.

While I do regularly use Lightroom and the Affinity suite of tools, I don’t do a lot of video or multi-media work on a daily basis. The little bit of tinkering I’ve done with these tools lives up to the various YouTube reviews, and obviously it’s a quantum leap from the old machine.

But I’m principally doing software development work, and chewing through tens of thousands of markdown files on a regular basis. One project I deal with daily is an Astro.js project with over 10,000 pages, so lots of file I/O… My build time went from 30 minutes down to less than 10 minutes, which alone is a nice productivity win. The measurements I made comparing the SSD I/O shows a 5x improvement, so that’s on par.

The performance increase while using the machine for what we’ll call “stuff” is subjectively staggering. Basic web browsing is epically fast, and Visual Studio Code is actually snappy. Something has happened over time where using DevTools in Google Code had become a true exercise in patience, and while I won’t go as far as to say it’s pleasant on the Studio, it definitely is workable again.

I won’t re-hash benchmarks and stress tests… There’s plenty to be found on-line, and your use cases and workflows are likely much different from mine.

Rather, I’ll address some other concerns and questions that I had while reading forum posts on MacRumors and waiting for the machine to actually show up.

Fan Noise… Is the Mac Studio the Loudest Mac Ever?

One issue that received a lot of attention relates to fan noise, and there seemed to be ample criticism of the default fan speeds and the fact that the Studio’s fans never seem to stop spinning even when the machine is at idle. Some users have reported “whistling” noises, and I suppose it’ll remain to be seen if there is some sort “Fan-Gate” for folks who have apparently sharper hearing than my own.

What I can tell you is, coming from a vintage MacPro sitting under my desk, the MacStudio is as silent as I can imagine. I downloaded a audio meter app to my phone and took measurements below, starting with no computer running at all…

From here, with the Mac Pro running I took measurements from my desk position…

…and then with the Mac Studio…

What you’ll notice is that the measurement with the Mac Studio running is actually about as quiet as the room with no computer on at all. And to be completely fair here, a went from a regular monitor to an Apple Studio Display that has two internal fans, so there’s honestly the potential for monitor fan noise somewhere in this measurement as well.

So the short answer is, at least for me, this computer is about as close to silent as I could imagine in my environment. Is it louder than a Mac Mini? I have no idea. I don’t have a Mac Mini to compare it to. But if you’re coming from a legacy Mac Pro, I doubt you’re going to be kicking yourself over any increased noise from the machine.

Power Usage… How Many Years to Payback the Cost of the Mac Studio?

TL/DR… Too many. But still.

Another potential benefit one user pointed out that I hadn’t initially considered was power consumption. I tend to leave my development workstation on overnight because I have background tasks that are collecting data, and I have file syncing tasks that run at odd ours. So out came the Kill-a-Watt for a quick comparison between the two machines sitting at idle…

That 10x difference in power consumption was an unexpected benefit… Now granted we’re not yet suffering from the same sort of crazy electric rates I guess people in the UK and Europe are starting to see, but looking at my Arizona utility rates, my quick math here suggests I’m going from about $15 per month in costs leaving that Mac Pro running year round, and dropping it down to about $1.50, so a savings of around $150 a year or so. It’s not like that means the machine’s paying for itself in power savings by any means, but it’s a nice bonus… Especially considering much of that Mac Pro power usage is probably going out as heat that I’m spending most of the year trying to AC its way out of the house too.

Would I Buy the Mac Studio Again?

In a heartbeat. It’s the fastest Mac ever made, at least until the new Mac Pros get announced. And as much as I enjoyed my last Mac Pro, and as much as the upgradability bought me many more years of service, I couldn’t justify buying the 2019 Mac Pro, and I doubt the 2022 or 2023 Mac Pro is going to be much different in that regard.

I’m expecting I’ll get five or more years out of the Mac Studio, maybe longer if my workflows don’t get too much more taxing. For what I’m doing right now, so many things have become instantaneously fast, and the rest take just the right amount of time to fit in a quick trip to the coffee maker.

A review wouldn’t be complete without a couple of quick installation shots and some discussion of the way I set this machine up. My steel monster desk had framing that allowed me to use self tapping metal screws to mount brackets to hold the studio right near my work area…

…which let me route most of my cabling under the desk. I only have an ethernet cable and a power cord coming up the desk leg now, which is incredible if you’d seen the rats nest of cable the Mac Pro demanded.

As a result, my desk is even more streamlined and I’m one step closer to OCD nirvana here… Check out the images below. And thanks for reading.